Recent Amazon policy shifts have disrupted the product launch blueprints followed by sellers for the past 3-4 years. But with disruption comes opportunity and an enormous but largely unnoticed opportunity has emerged.

What is Amazon Live?

A small pilot program called Amazon Unboxed launched in 2017. If you haven’t heard of this program you’re not alone, It garnered little attention and went dormant for a period before being formally re-branded as Amazon Live. Unlike its predecessor, Amazon Live is taking off.

Amazon Live is a streaming video program where highly followed influencers share their favorite Amazon-listed products with their audiences. For readers in the U.S., Amazon Live is formatted similarly to QVC or HSN (Home Shopping Network). Based on conversations we at Rebaid have had with top Amazon Live influencers (known as Amazon A-Listers), it is apparent this program is one of Amazon’s top development initiatives. 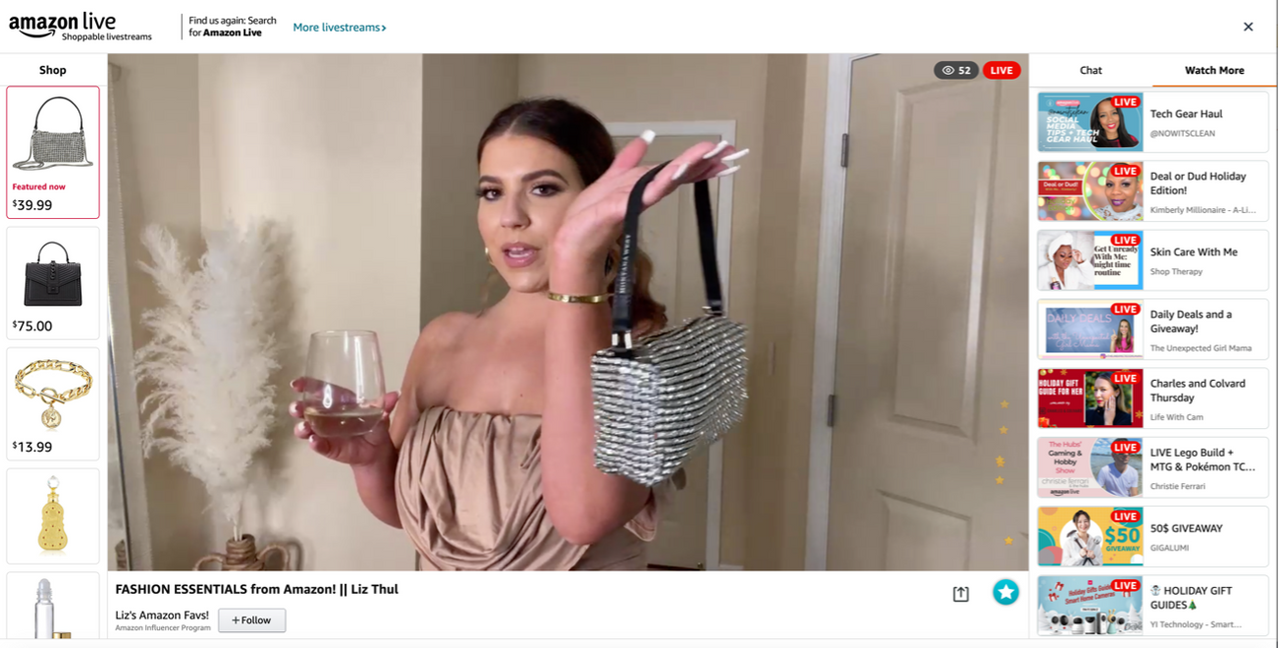 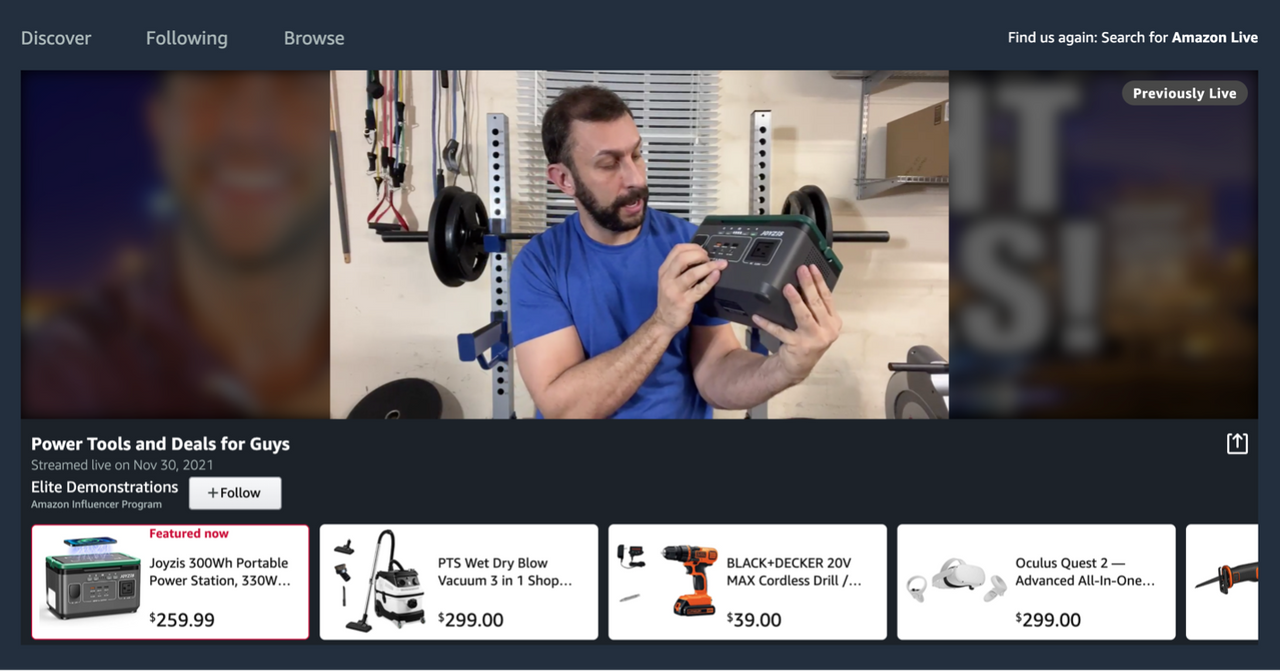 When Amazon’s PPC advertising program was first launched, per click cost often ranged from $0.03 - $0.05 and the average ACoS was around 5%. Achieving those results today is virtually impossible with even the most well-optimized campaigns. Today most sellers lose money on PPC advertising and very few find it to be a financially viable growth strategy.

The same thing will happen with Amazon Live placements. The sellers who become early adopters of this program will reap the rewards with profitable, scalable influencer campaigns that return sales revenues greatly exceeding cost.

Creating your first Amazon Live campaign takes just a few minutes and cost less than most other promotion types. Start by signing up for a Rebaid Seller account. Once signed up, click "Influencer Campaign" at the top of the seller dashboard.

You will be prompted to enter basic information about your product category and campaign goals. Once entered you will see all Amazon Live influencers matching your criteria. 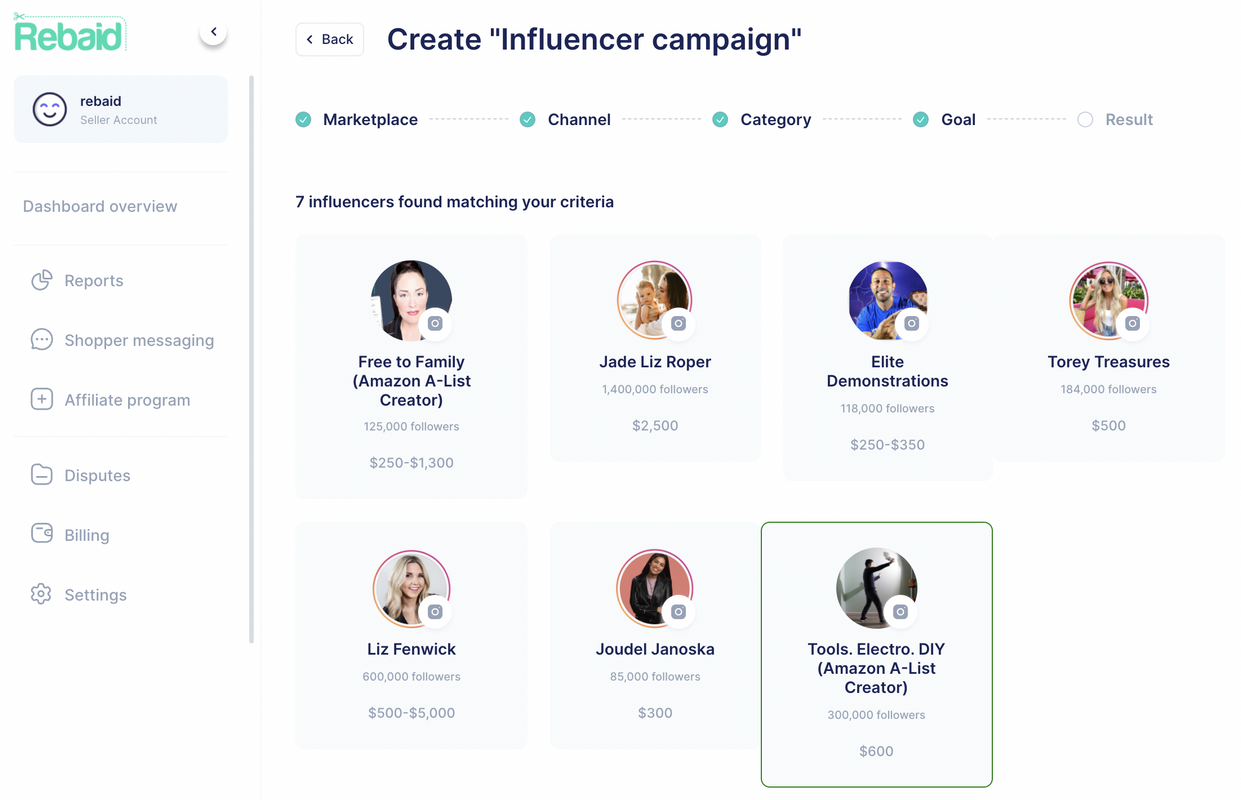 The influencer's audience size and prices are displayed beneath their profile picture. Click on an influencer who you are interested in to see their full bio and the services they provide for the listed price.

Inclusions in Amazon Live broadcast start as low as $250 and the benefits extend beyond the direct viewership of the live video. Past recordings are displayed on the influencer's Amazon Live page, on your product listing page, and some Amazon category pages.

Once you’ve decided on an influencer simply click Submit on the final step. You will be charged the influencer's content creation fee and they will be notified of your purchase. Within 24 hours you will be sent instructions on where to send a sample product unit to be used in the broadcast, and your broadcast time will be confirmed shortly thereafter.

Why Book Influencers Through Rebaid?

Rebaid pre-buys placements in bulk allowing us to obtain pricing for video placements at a much lower cost than individual brands would receive from an influencer for a one-off video. Moreover, Rebaid’s existing relationships with these influencers allow for a seamless process and quick content production. This means your product gets in front of a large audience faster than your competitors.

Few brands are familiar with Amazon live and even fewer are using this powerful tool for product launches. This will certainly be a cornerstone of many brands' launch and growth plans in the years ahead, but early movers have the most to gain when costs are low and ROI is high!

Amazon Live is inherently compliant with Amazon’s Seller Code of Conduct so brands can utilize this growth tool with full confidence their seller account will remain in good standing.

Rebaid is proud to be the first major launch platform facilitating Amazon Live placements and is constantly onboarding more influencers. Most importantly this strategy is scalable. After your first successful Amazon Live campaign, you can scale up by purchasing placements with mega influencers (1MM+ Audience Size) at higher price points.